The Maple & The Salsa

When travelling out of the country to speak at a conference, I like to bring a little something from Canada with me to give away to new friends – organizers, fellow speakers, attendees. I started doing this at LoopConf earlier this year, and thought I would continue the tradition this past weekend at WordCamp Columbus.  This turned out to be a much better story than I ever could have imagined.

During my talk on Friday afternoon about WordPress Hooks, if someone asked a good question, I’d give them a Maple Sugar lollipop.  Maple sugar is a very Canadian thing, and next to caffeine, sugar is the currency of conferences.  After my talk, I checked my Twitter feed, and found this tweet from the guys from WordPress hosting company Pressable:

These guys are from Texas. This is apparently a very good thing when it comes to salsa, so I agreed to the exchange.

This is where they upped the game…

I’m at lunch the next day, when Jeff and Zack tap me on the shoulder.  They’re ready to make the trade.  Not only did they have a nice container of Salsa for me, they had a bag of chips to go with it, the perfect snack.  An exchange was made, photos were taken, and Canada-US relations were improved. 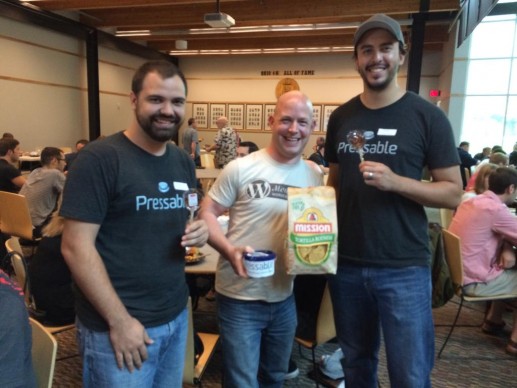 What I had no way of knowing at the time was the effort that went into this trade.

At the after party on Saturday night, my new salsa providing friends were asked where they got the salsa.  Had they just purchased it at the local grocery store and put it in a tupperware container for me?

Nope. That wouldn’t be right.

It turns out they called a friend in Texas who had an excellent recipe.   They got the recipe, went to the grocery store and bought all the ingredients.  Back in their room at the Red Roof Inn, armed with peppers of all sorts and their newly purchased food processor they got to work.  Yes, you read that right, they bought a food processor (probably my favourite part of this story!)

The result? An very spicy salsa and a great story about the WordPress community!

Pressable gets an A+ for their effort on this exchange!

I definitely got the better end of this bargain (unlike the current exchange rate between our countries currencies).